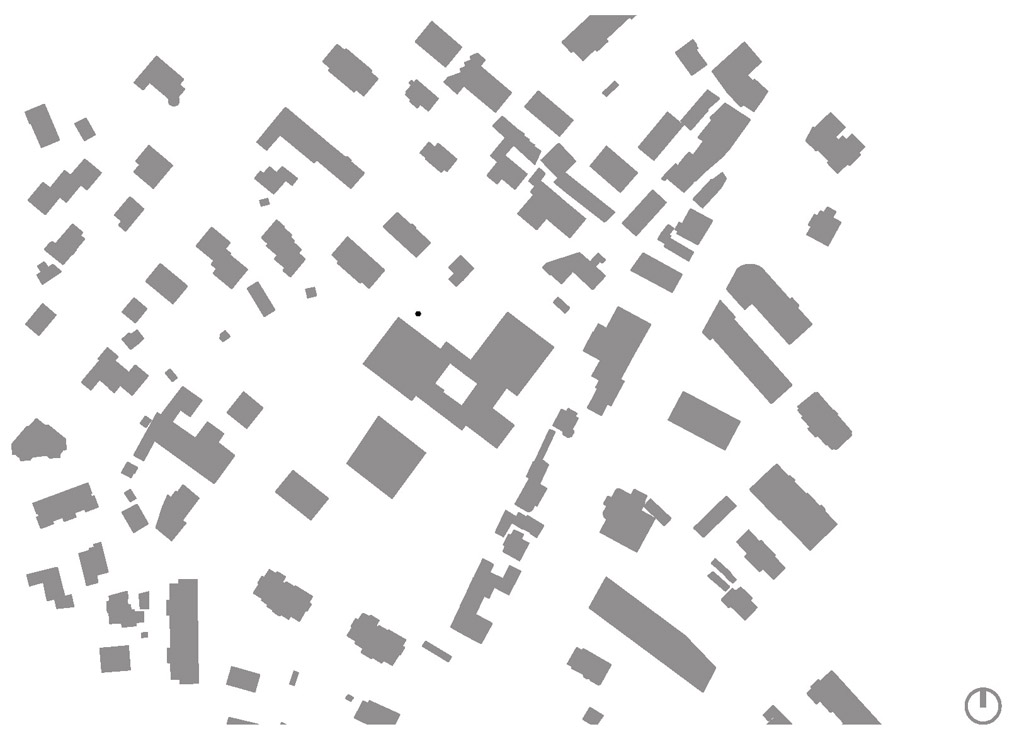 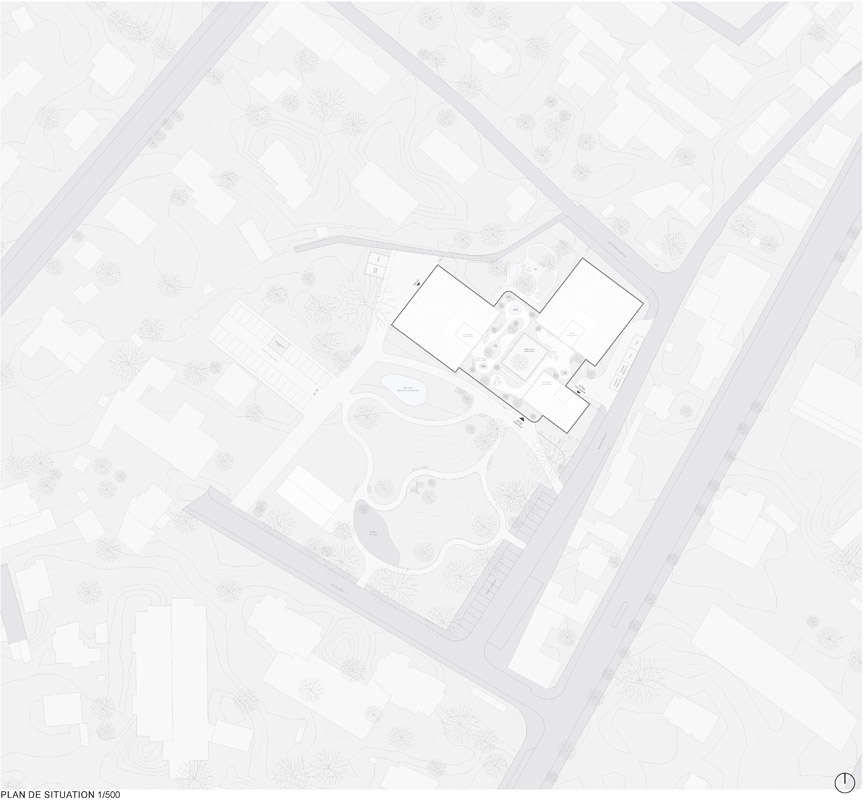 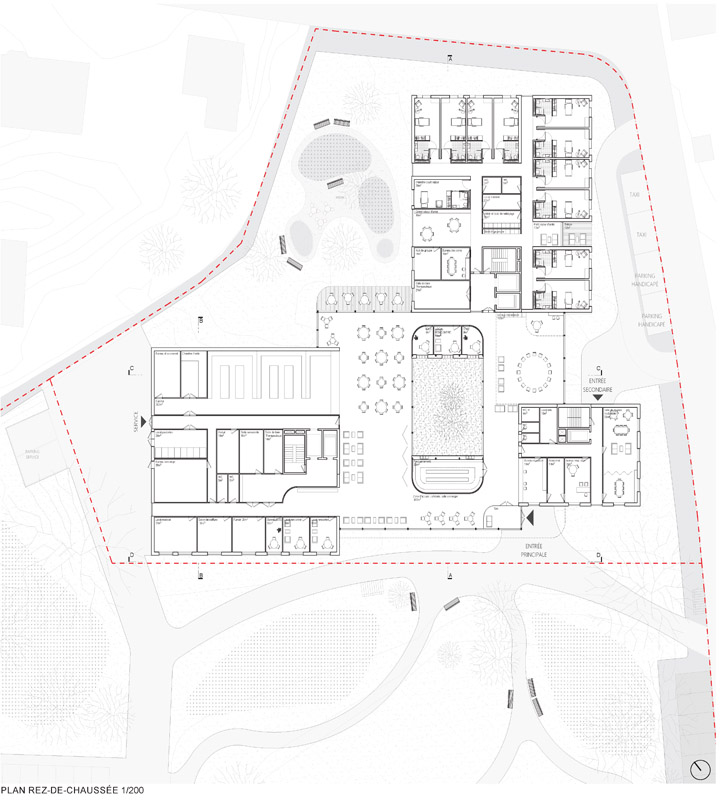 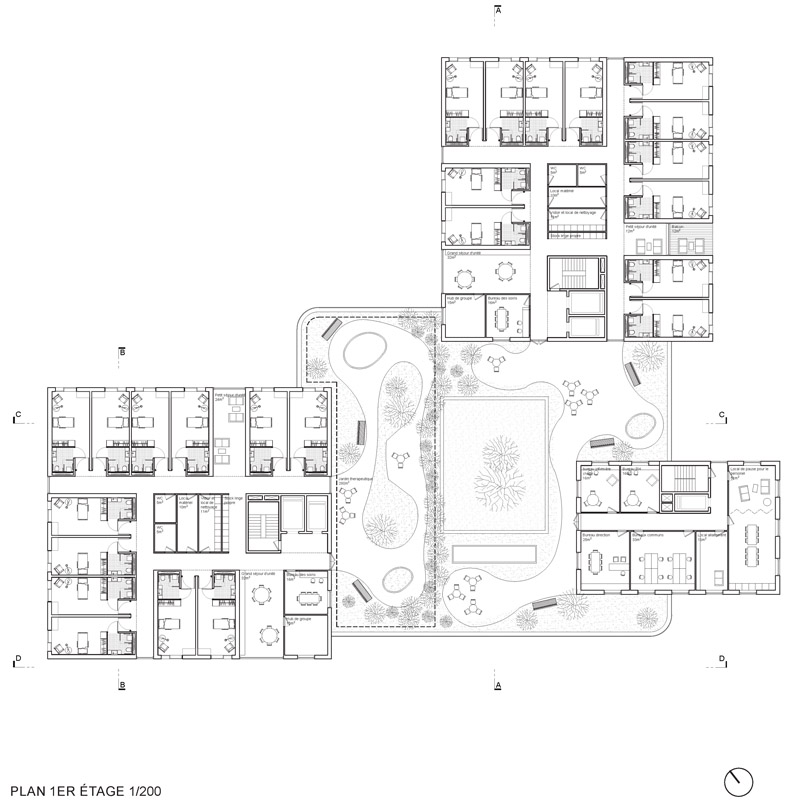 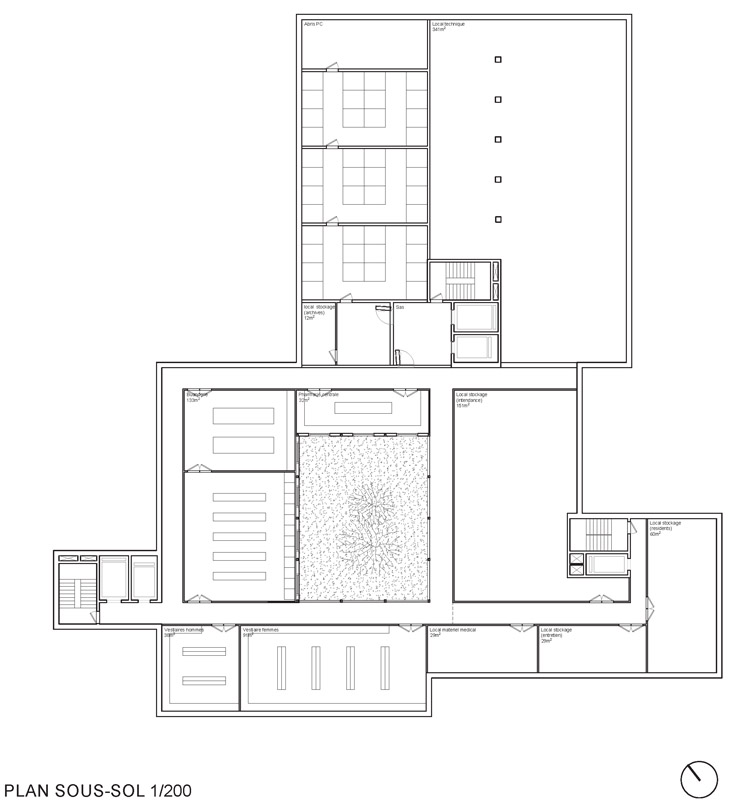 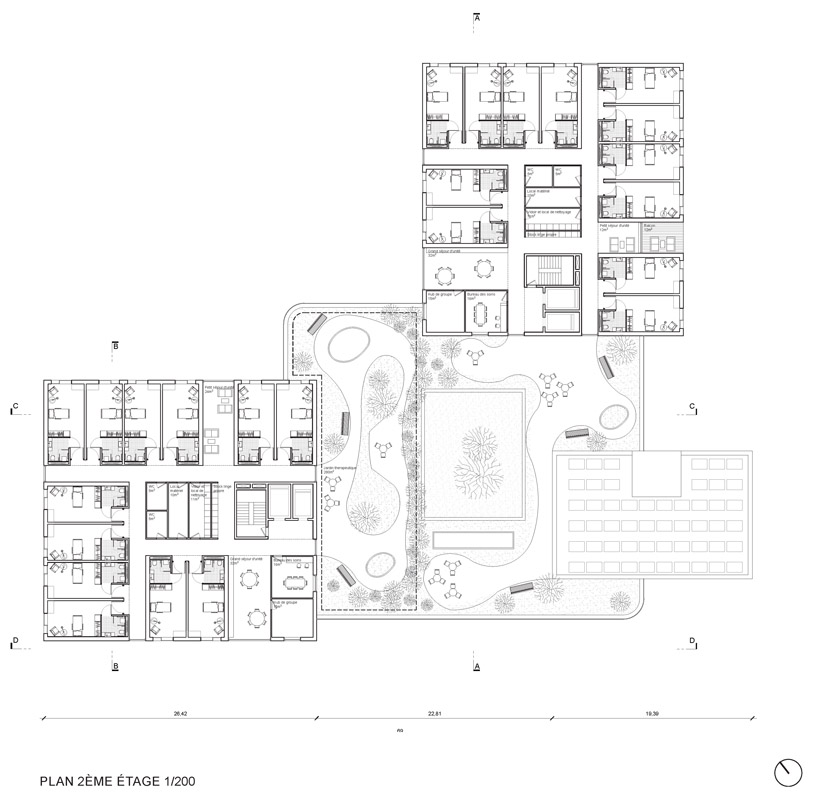 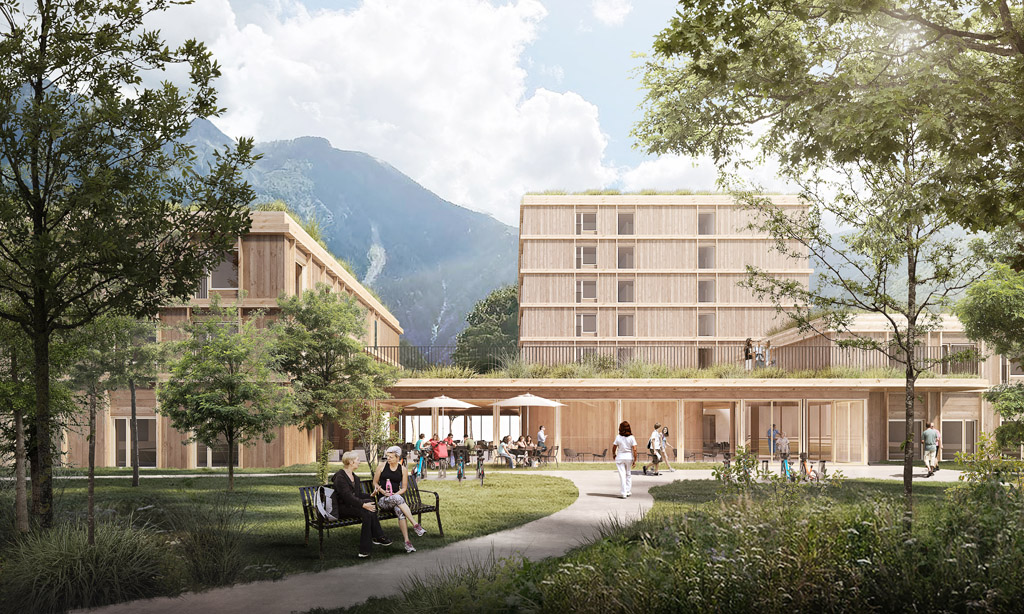 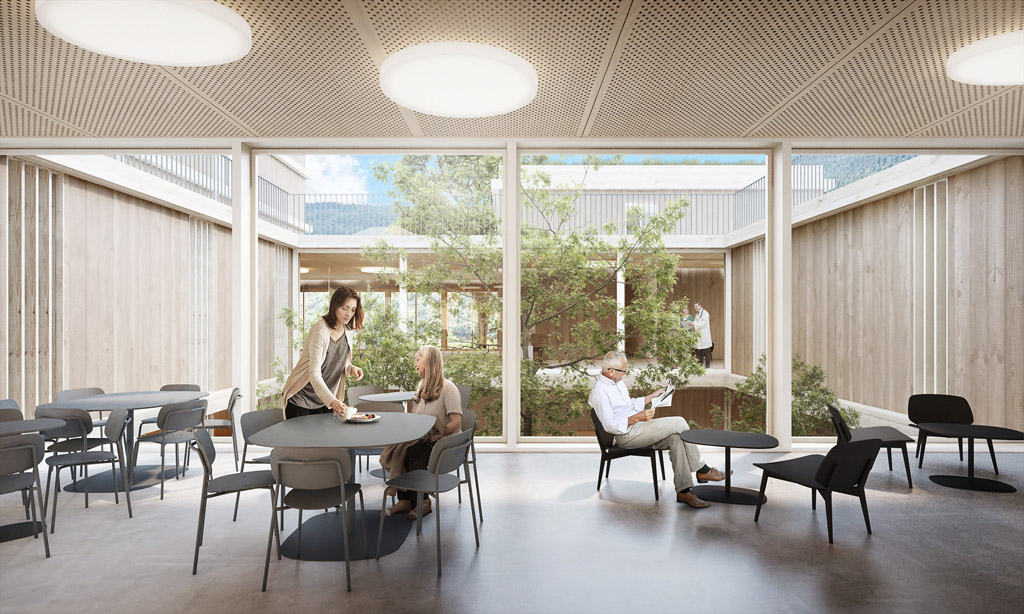 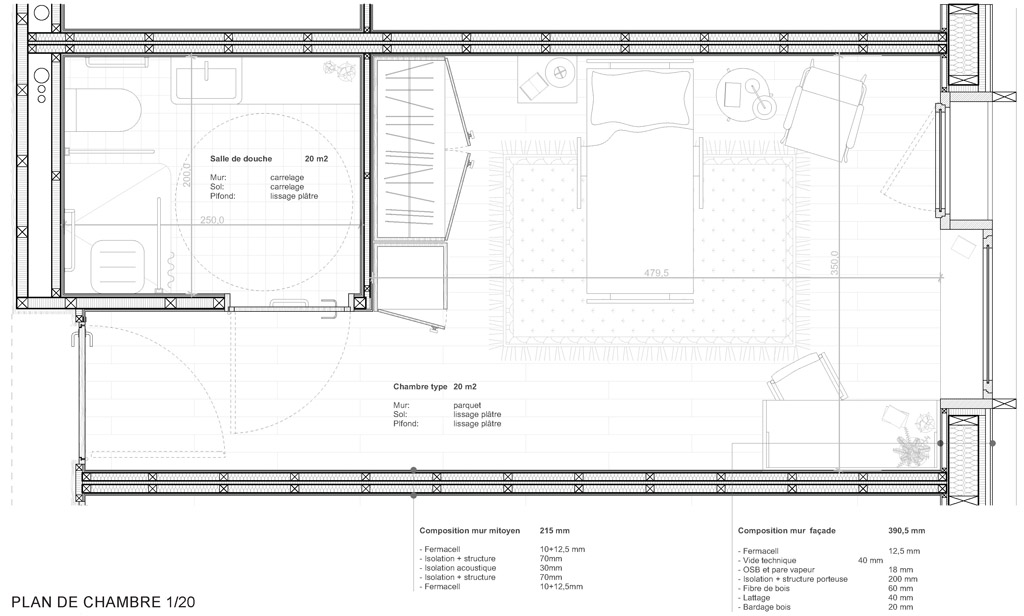 Vermouth project wants to propose a specialized medical establishment for old people without giving the impression of being in a hospital or an institution but rather an apartment or a hotel, it is to this question that the new project undertakes to answer through our proposal. Thus, the project is inspired more by housing typologies than by that of hospitals, than by the composition of buildings that form a small community than by more substantial built masses that would contrast with the built scale of the place. To do this, the project is broken down into sub-groups, these sub-groups are brought together in their own buildings which are then linked together by a common space which could be likened to the village square.

All the common and service functions of the EMS are grouped on the ground floor around a central patio with trees and largely glazed. This arrangement allows a clear orientation of the circulation device from the different entrance areas. The direct connection to the patio brings natural, generous, and controlled light inside the building. The chosen spatial device offers residents an overview of life and movements within the institution. The ground floor thus includes the common areas in relation to the living units and those intended for the community life of the establishment as well as for the reception of visitors. The proposed spaces radiate around the patio which animates rich and varied architectural sequences. The service areas are located on the ground floor of the three buildings. They are de facto more intimate and controlled. This device thus offers a clear hierarchy between the spaces dedicated to all and those more specific which welcome the residents. and the nursing staff. For reasons of use, the rooms of the two geriatric psychiatry support units are placed on two levels above the services linked to them. Each level is composed of 12 rooms and the premises that accompany them. From their space, they can easily go to the therapeutic garden which is located on part of the roof terrace on the first floor. Following the same logic, seven support units with a total of 83 rooms are superimposed on seven almost identical and modular levels in a similar building. The central patio is located on two levels, which makes it possible to bring natural light directly to the basement, in particular for all the programs which involve workstations. This device also makes it possible to reduce the need for artificial lighting and assisted ventilation for these specific rooms. In the basement, which is partially bathed in natural light from the patio, are the technical functions, the storage of various materials, the laundry room and the staff changing rooms, not to mention the PC shelter. The decomposition of the program into several volumes accentuates the building’s belonging to the district.

The standard plan of the living units which is found nine times (spread over two buildings) is inspired by the typology of apartments and the principles dear to Montessori theories which want the space to be flexible and easily appropriated by its occupants as well. different though they are. Each living unit begins with a landing outside the unit which can be likened to the front door of an apartment. The so-called day spaces are distributed on either side of the plan for different spatial sequences. The corridors that serve the entire unit revolve around the service core and enjoy a visual extension to the outside which helps the orientation of residents while providing a significant contribution of light and natural ventilation. These ends can also accommodate an armchair and a coffee table in order to offer individual spaces for additional relaxation. The choice to offer one living unit per floor also makes it possible to offer more unobstructed views from the bedrooms and to enjoy the Valais panorama that can be seen from the site. Thus the rooms on the lower levels dialogue directly with the park and the surrounding green spaces, while the upper levels enjoy a breathtaking view of the valleys that border them. Inside each living unit, the corridors are naturally lit at their ends. Public spaces inspired by the typology of apartments are placed along the circulation. Enlivening the wanderings of the residents and forming an integral part of the living space. The rooms are grouped by two and in three distinct groups. Their entrance, slightly set back, makes it possible to expand the corridors and create more intimate areas, helping the transition between the public and the private, once again like the entrance thresholds of the apartments. The rooms radiate inside the building, which offers rich and varied orientations to the rooms on the neighborhood, the park and the distant landscape.